Over the course of 8 days, July 12-20th, four DTA wrestlers competed in the Cadet and Junior Freestyle and Greco National Championships.  The event was help in Fargo, North Dakota.  Every year the best wrestlers in the country look forward to their opportunity to travel to Fargo for this heralded event.  Wrestlers can expect between 70 and 120 wrestlers in each weight class.  In the end, the top eight in each weight are recognized as All-Americans.  The four boys representing team DTA this year were Cadet, Kyle Richardson, and Juniors, Kase Mauger, Braeden Dickinson, and Zeke Williamson. 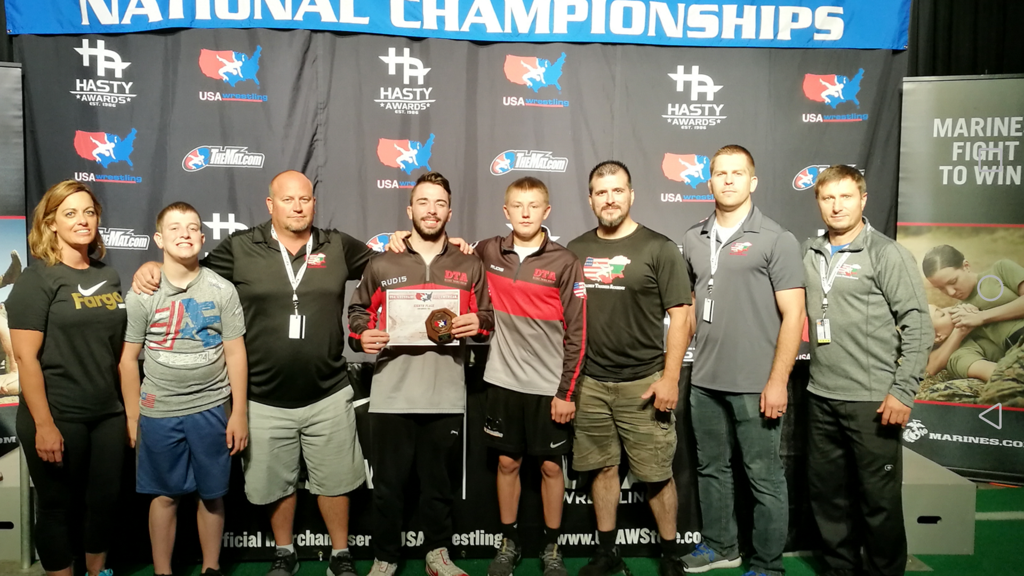 The first wrestler to compete for Team DTA was Kyle Richardson at 126 pounds.  In his first trip to Fargo, Kyle opened the freestyle tournament losing a close fight to an opponent from Alaska.  He rebounded from the loss to defeat Hudson Neely of Oklahoma 13-2.  In his final freestyle match, he was defeated by Donovan Fisher of Texas.  Richardson continued his Fargo experience in the greco tournament.  He started off by dominating Varrius Scanlan of Oregon 10-0.  His second match was against eventual All-American Cody Chittum of Tennessee where he would lose 11-0.  In his final greco match, Kyle lost a close 7-4 match to another eventual All-American, Carson Prim of California.

Competing for his first year in the junior division was Kase Mauger.   He started his freestyle tournament at 106 pounds.   He completed the first day of competition looking invincible, defeating opponents from Texas and Minnesota 10-0, and 11-0 respectively.  His big challenge came off of the mat as he was unable to make weight for the final day of the freestyle tournament and was forced to forfeit the remainder of his matches.  He would then start the greco tournament up a weight class at 113.   He started greco right where he left off in freestyle, defeating his first three opponents by scores of 12-0, 10-0, and 12-1.  He would fall two times in a row, however, to the fifth and seventh place opponents 15-8 and 10-0 to finish one match away from being an All-American.

In his final trip to Fargo, Braeden Dickinson competed at 132 pounds.  In freestyle, he started off on a roll.  He defeated his first foe from South Carolina 15-6.  The next opponent would get the better of him, however, 14-4.  Braeden rebounded quickly with a 9-3 victory over an Oklahoma opponent and a 16-8 win over Devin Holman of California.  His final match of the freestyle tournament would end in a loss to Joshua Jones of Pennsylvania 8-4.  In the greco tournament, Dickinson highlighted his first two matches with some big lifts and throws to defeat each opponent by a score of 10-0.  After overcoming some adversity in his third match, he was able to defeat a Florida opponent 7-4.  The next two matches, would be against tough opponents.  First, Reece Witcraft, eventual All-American.  Witcraft would get the victory 9-0.  Next, Savion Haywood of Illionios, who would also get the better of Dickinson 7-0.

Zeke Williamson started off his Fargo run with a close loss, 10-9 to Cael Carlson of Minnesota.  Bouncing back, however, Zeke would crush his next three opponents 10-0, 10-0, and 12-2.  This would advance him to his final match of the night against Matt Lee of Indiana.  There his freestyle tournament would end in another close loss, 5-2.  Zeke would not stop with that result.  He was determined to have a better greco tournament.    He was crushing his first opponent when he attempted a throw.  Upon landing on the mat, it was clear that he had sustained an injury to his shoulder or collarbone.  Zeke continued the match and won by a 10-0 score.  The injury sustained in his first match would end up costing his the second match, 6-3.  It was at this point that Williamson decided that he had come to Fargo to be an All-American, and that he would not be defeated until he had accomplished that goal, even if he was hurt.  With the help of coach Delchev, Zeke made some changes to his wrestling style and strategy.  This allowed him to work though the next match and win by a score of 6-2.  Now that he had a plan to protect himself and still be competitive, it gave Zeke the confidence to man-handle the next three opponents by scores of 11-0, 13-1, and 14-4.  This advanced him to the "blood round."  This is the round where the winners are guaranteed All-American status and the losers go home empty handed.  Though his opponent was worthy, Zeke would win one more match by a score of 11-1.  Now that he was in the placement rounds, his next he fell to the next opponent 2-2 on criteria.  In the final match Zeke would fall short to Cade Devos of Iowa 6-0 and finish his tournament in 8th place as an All-American.

Of the experience, Zeke commented, "It feels great to become an All-American again.  It has motivated me even more to know that my training is working.  I owe a big thank you to Coach Delchev for his relentless efforts in helping me to reach my goals.  Coach Delchev and I believe I will be a national champion.  Moving into my senior year of competition that will be my goal and I will continue to trust my coach and train to improve and reach that next level.