DTA Wrestlers Among the Best at Northwest Regionals

On March 24th and 25th, some of the best talent in the Northwest United States gathered for the 2018 Cadet and Junior Northwest Regional Championships.  Among the talented group were DTA wrestlers Kyle Richardson, and Braeden Dickinson.

Kyle Richardson wrestled at 126 pounds in the cadet freestyle division.  He opened up the tournament with a close win over Andrew Macias of Washington 5-3, advancing to the quarterfinals.  In the quarters, he spent only 28 seconds on the mat before pinning Washington's Austin Pugh.  In the semifinals, he would fall short of beating Haiden Drury of Washington by a score of 11-0.  This would line him up to face his first opponent again, Andrew Macias.  Richardson dominated the match this time, pinning Macias in 59 seconds.  He then finished the tournament in third place by dominating Carson Tanner of Washington with a pin in one minute nine seconds. 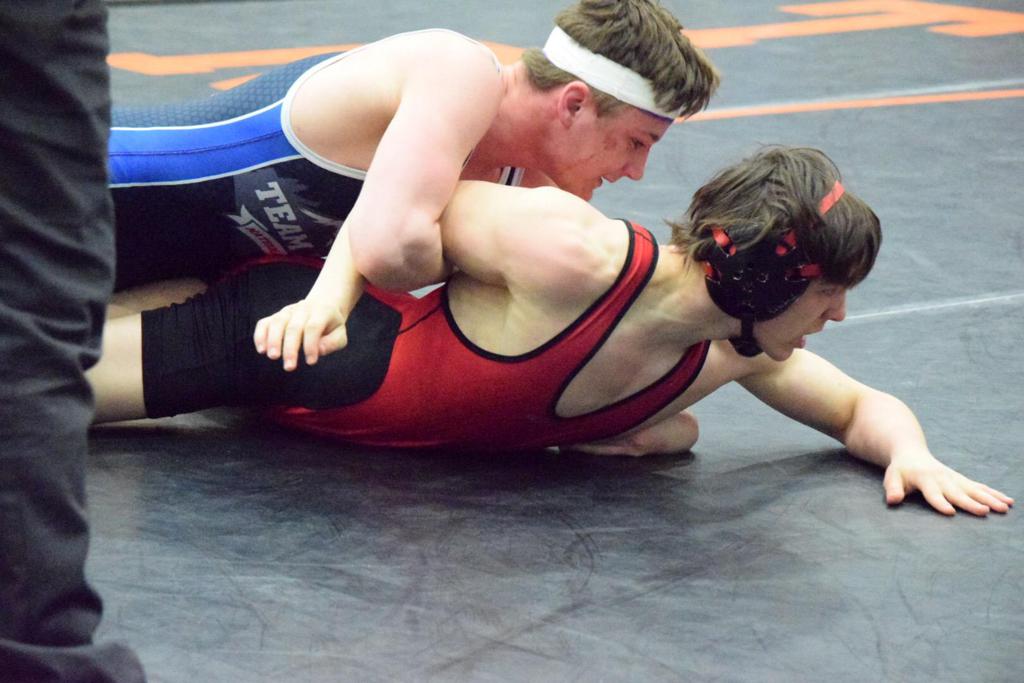 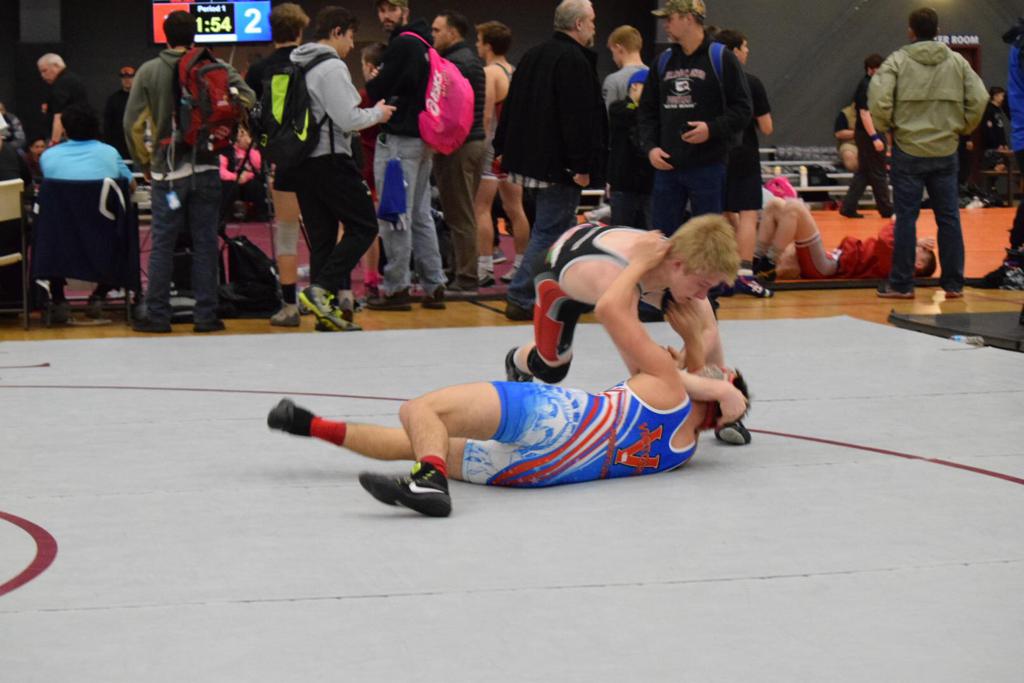 Braeden Dickinson represented team DTA at 132 pounds in both the freestyle and the greco tournaments.   In freestyle, he got on a roll early in the tournament by beating two Washington foes, Zachary Rowe and Logan Patrick, each by a score of 10-0.  In the quarterfinals, however, he suffered a close defeat at the hands of eventual champion, Clayton Gilliam of Washington 8-7.  He bounced back from the loss with a second round pin over Devin McCrae of Canada.   His next match would be a rematch with Zachary Rowe of Washington.  This time Rowe would get the 5-5 win on criteria.

Braeden was not finished with his visit to Centrallia.  He came back strong in the Greco tournament.  He started with a 7-3 win of Jack Latimer of Washington, and never looked back from there.  His next opponent would be the freestyle champ, Clayton Gilliam from Washington.  This time Dickinson would dominate his opponent 13-2.  He was equally dominant in his semifinal bout, defeating Brennon McDermott of Washington 12-1.  His final opponent in the championship match was Evan Yant from Iowa.  Not even giving a chance to his Iowa foe, Dickinson was the better wrestler by a score of 13-2, becoming the Northwest Regional Junior Greco Champion. 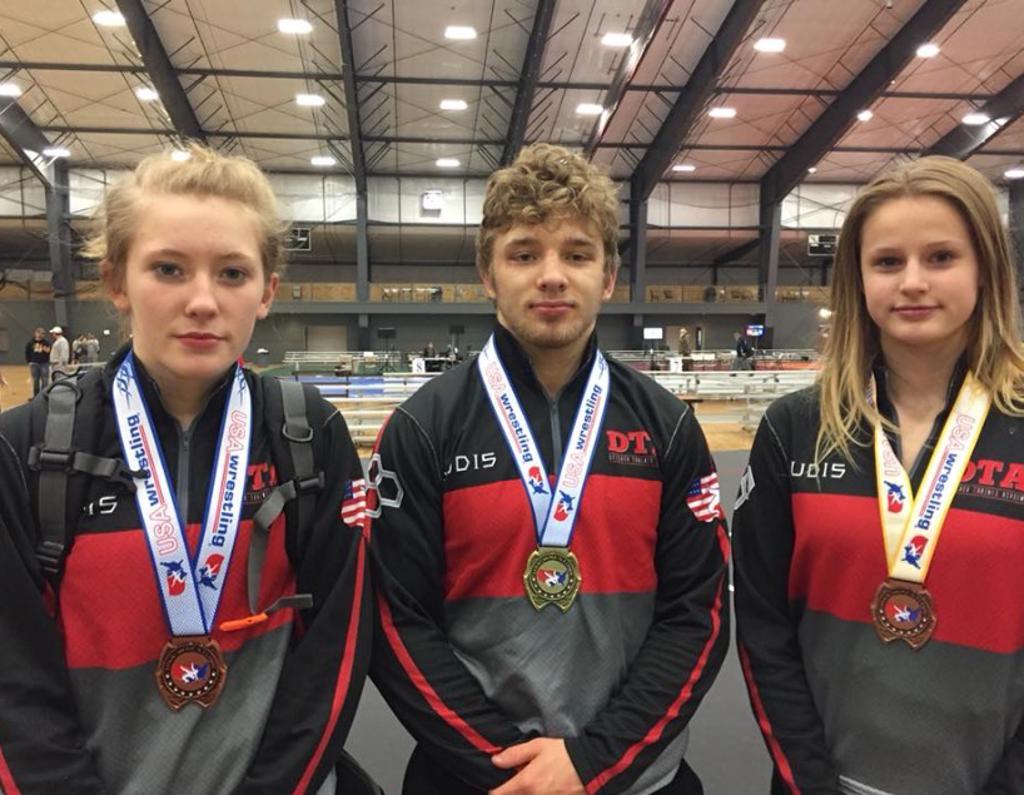 Also representing team DTA at the Junior 160 weight class was Adam Thomson.  Adam competed in both Freestyle and Greco.  In the freestyle tournament, he started with a 14-2 technical fall over Carsen Walton of Washington.  He followed that up with another win over another Washington opponent, Jason Lewis 10-0.  He would then match up with fellow Canadian, Amarvir Atwal.  Thomson would defeat Atwal 13-0 and advance to the semifinals.  There he would face California’s Jace Luchau.  He advanced to the finals with a 14-7 decision over Luchau.  His finals match proved to be a one sided battle.  Adam dominated Jacob Herrmann of Iowa with a 15-4 technical fall and became the Junior Freestyle Northwest Regional Champion.  He was not done there though.

Adam also competed in the Greco tournament.  He got the ball rolling quickly with a 49 second pin over Nathan Moore of Washington.  In the semifinals, he would earn a technical fall over Emiliano Mata of Washington 14-2.  To finish out a weekend of dominance, Thomson earned a 16-4 technical fall in the championship match over Jace Luchau of California.  Adam finished the weekend with two gold medals and out scored his opponents 83 to 19.

This weekend’s DTA competitors also featured two entrants in the High School Women’s division, Mika Coles and Pippa Bryan.  Mika wrestled at the 117 weight class.  Her first opponent was Kylee Jacobs of Washington.  Jones would pin Coles in just over four minutes.  In the consolation matches, she picked up a win by forfeit over Alisa Chin of Washington to advance to the third place match.  There she would face her initial opponent, Kylee Jacobs, again.  This time the result would be different, however. Mika would control the match and emerge as the victor by a 9-2 margin, claiming the third place medal.

The other female DTA wrestler for the weekend, Pippa Bryan, represented DTA at the 138 pound weight class.  Pippa opened up with a tough opponent from Washington, Elise Scrafford.  Scrafford would emerge the as the victor 10-0.  Bryan would rebound in the next match with an 8-6 decision over Hannah Johnson of Washington.  Late in her final match, Pippa suffered a pin by Victoria Hooks of Oregon.  Bryan finished with the fourth place medal despite holding a head to head victory over the second place winner.