Coach Ivan Delchev led a talented group of eight wrestlers back to his native country to attend the Dinko Petrov International Tournament in Stara Zagora, Bulgaria.  The tournament featured wrestlers from eleven different countries.  Team DTA included schoolboys Kayd Craig, Ty Mauger, Gabriel Taboa, and Preston Owens, and cadets Kase Mauger, Teegan Dunn, Christian Hudson, and Jakob Murillo. At the end of the tournament, it was clear to see the quality team DTA has developed.  Of these eight boys, they earned five gold medals, one silver medal, and one fifth place. 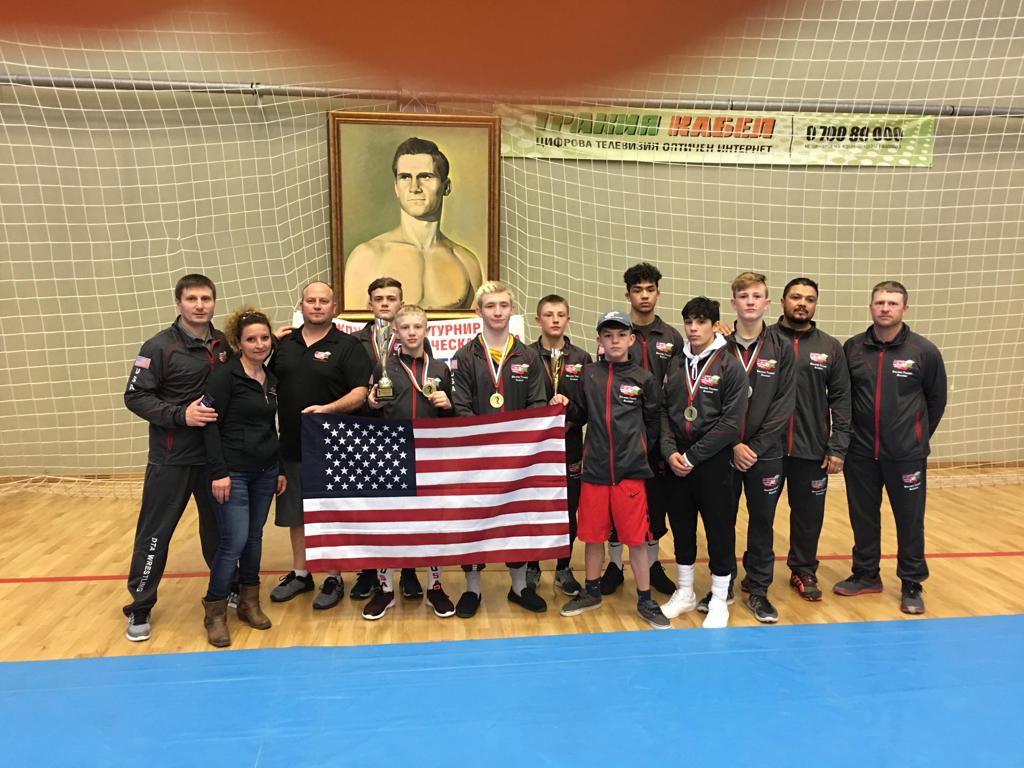 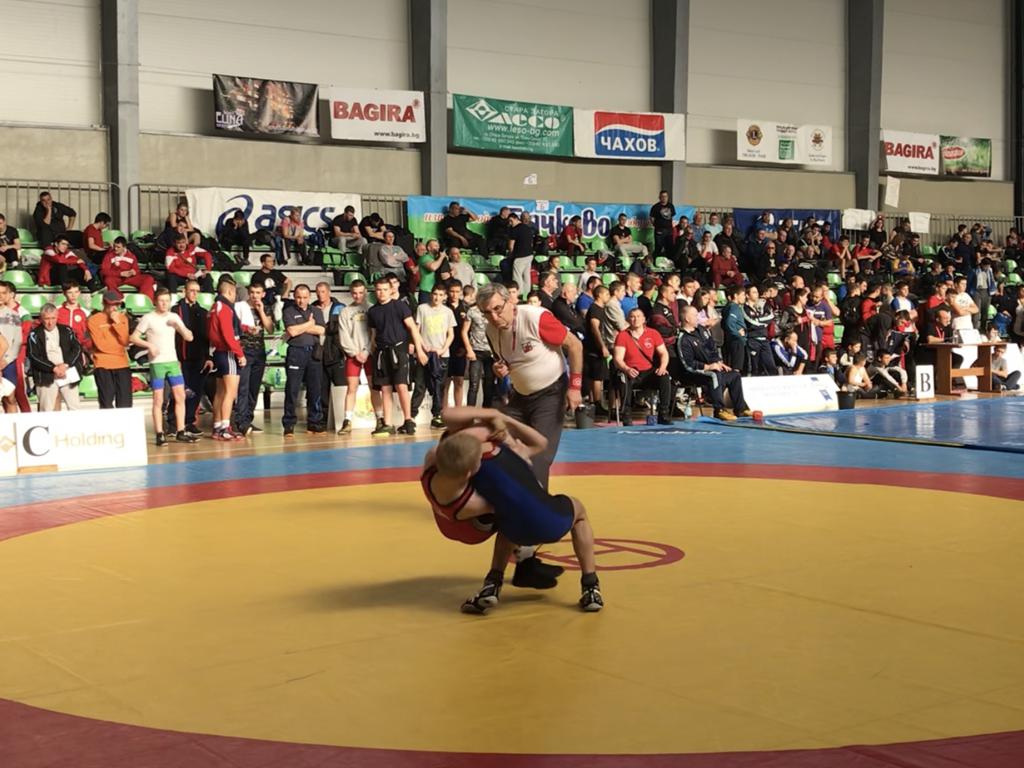 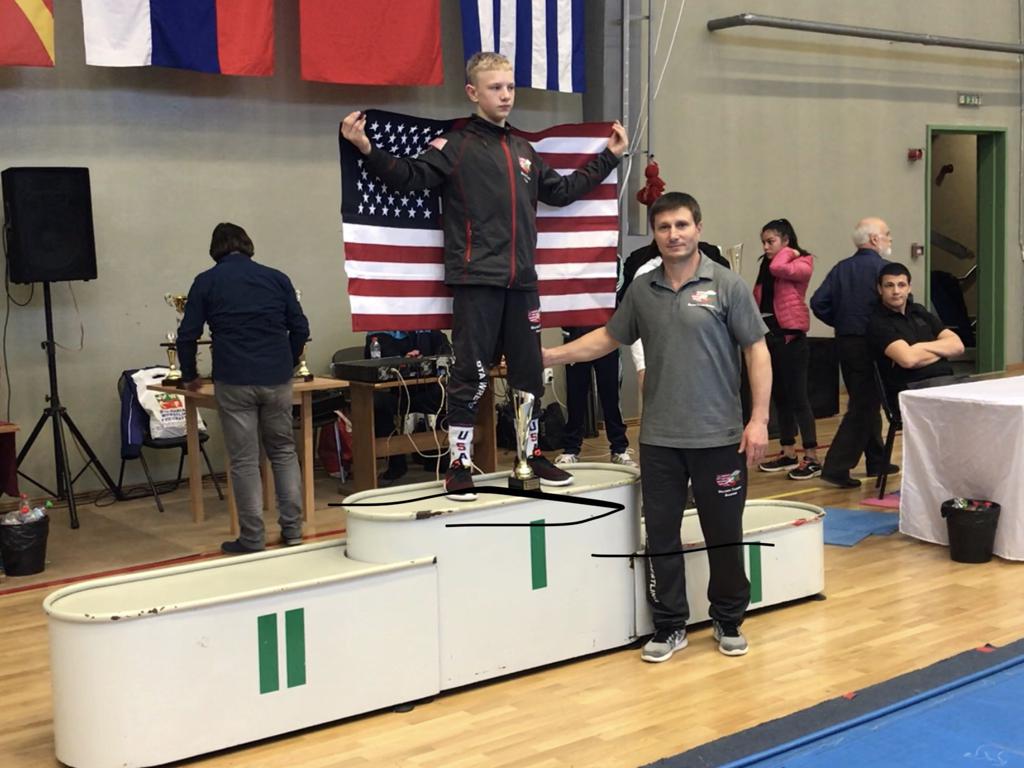 Kayd Craig began his first match with a a quick go behind, followed be a series of gut wrenches to defeat his first opponent.  His next match was against his teammate, Ty Mauger.  Craig scored a four-point arm spin, another takedown from a body lock, and a gut wrench to finish the match.  In the next match, Craig countered an early throw to collect a trapped arm and score three consecutive gut wrenches for the 8-0 victory.  In his finals match, he scored four and then two from a front head lock.  He followed that up with a quick gut wrench to end the match 8-0.  Kayd finished the tournament not only as the champion for his weight, but he was also named the outstanding wrestlers of the tournament for the schoolboy age group. 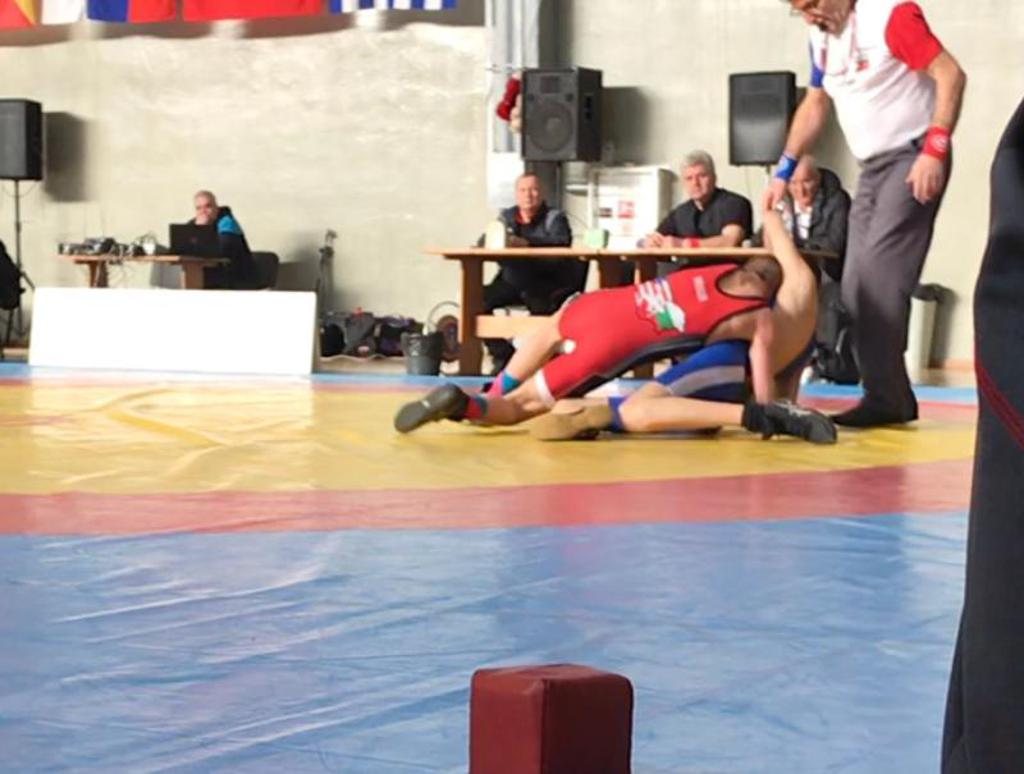 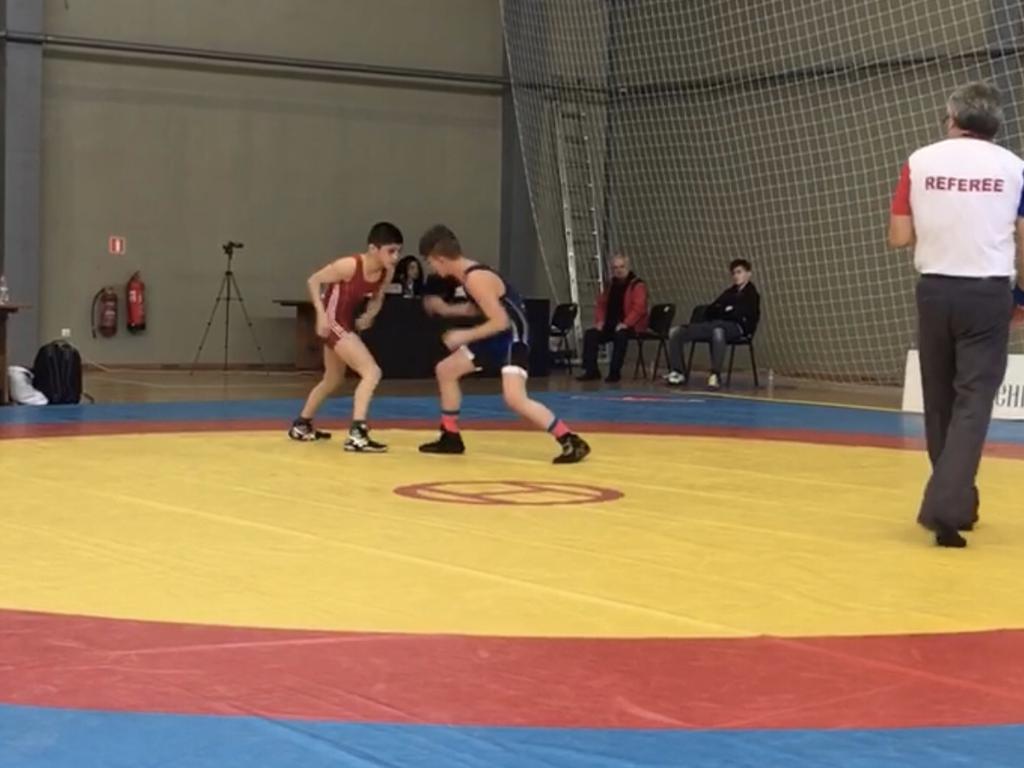 In Ty Mauger’s opening match, he ducked under a headlock attempt to score first. He followed his takedown up with three consecutive gut wrenches to end the match.  Ty fell in his next match 8-0 to fellow American, Kayd Craig.  He was then eliminated from the tournament with another difficult loss.  Giving up points on a headlock and go behind, Mauger was down 4-0 at the break.  His opponent scored next with a step out and again on a caution point.  Adding one more exposure, the match would end 8-0. 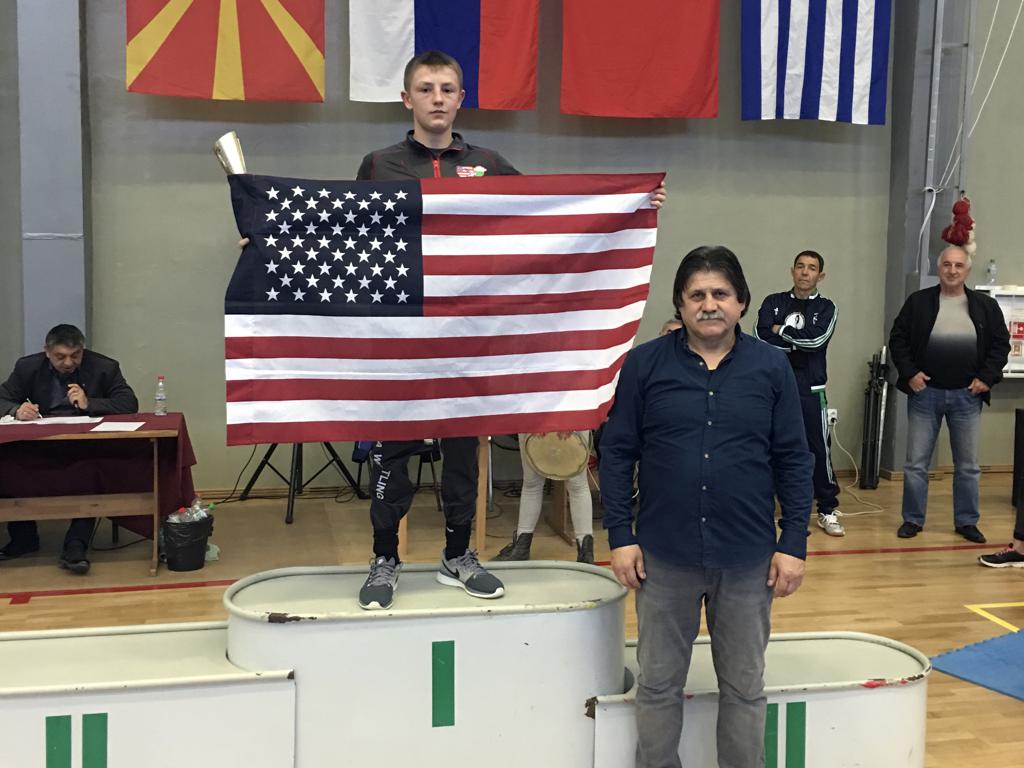 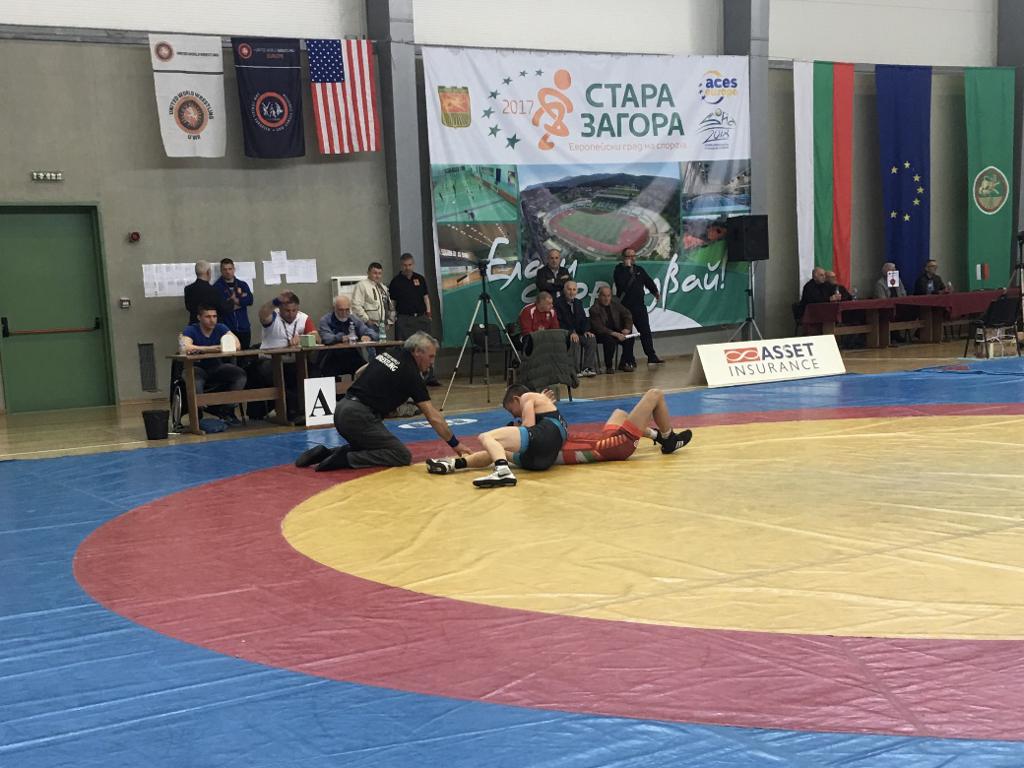 World Team Member, Kase Mauger started his tournament with a Bulgarian opponent.  In an early scramble, the Bulgarian scored two points.  Mauger quickly retaliated with his own two point exposure.  On the next restart, Kase fired off a single leg for another score, then a gut wrench for two more pointed and a pin.  Kase started his second match with an early takedown and a series of turns that led to a trapped arm gut wrench, ending the match 10-0.  In the next bout, Kase started off with a shot on the edge of the mat to earn a step out point.  He then countered a throw and collect a head and arm to end the match by fall.  Mauger finished as the tournament champion and was also named the outstanding wrestler for the cadet age group 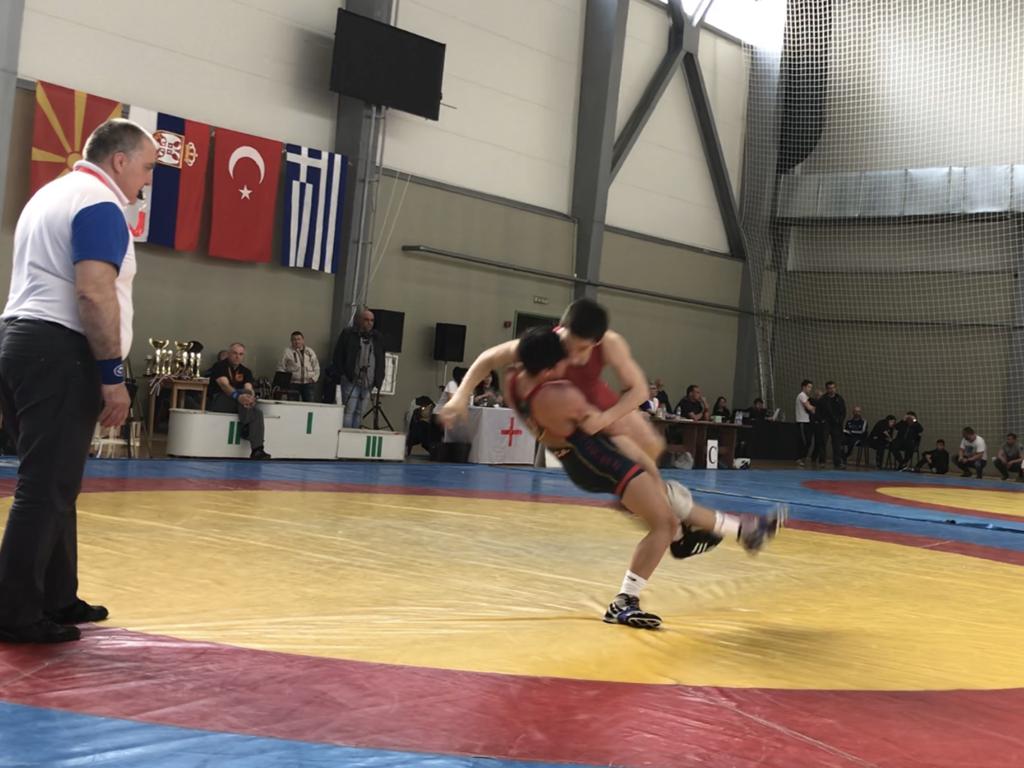 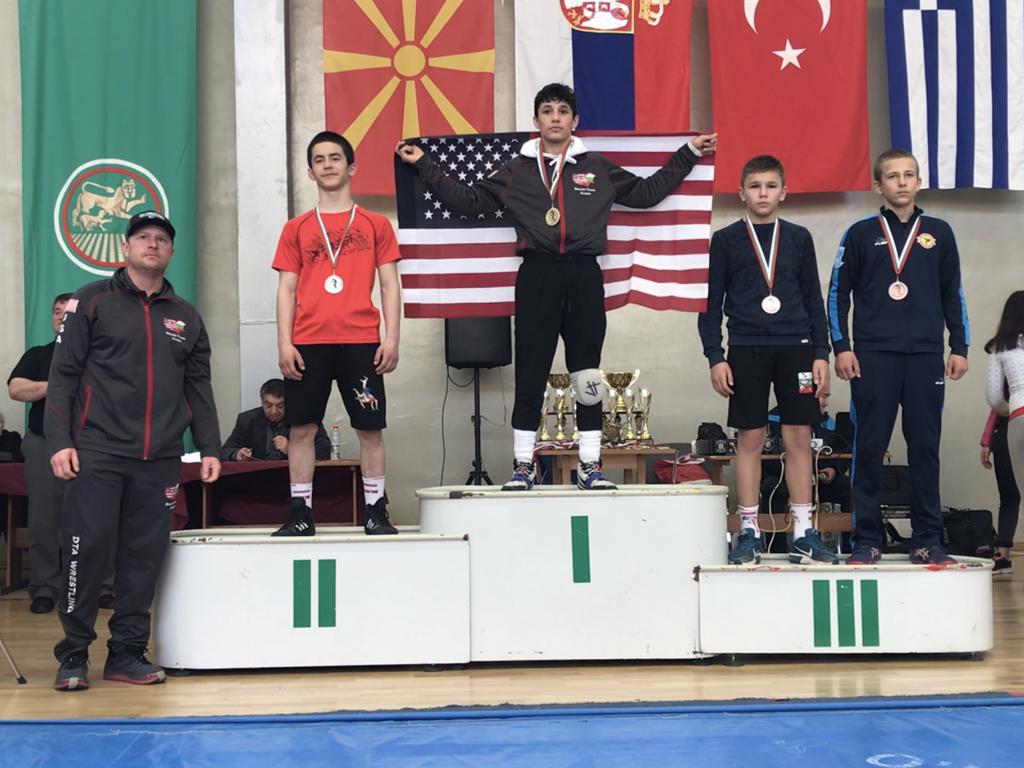 Defending Pan-American Champion, Gabriel Taboa, won his opening match by technical superiority, scoring early with a front headlock, followed by four consecutive gut wrenches to end the bout early.  In his second match, Taboa got on the board widely with an ankle pick followed by two leg laces.  He the ended the match with a duck under and a gut wrench.  In his championship match, he got things rolling early with a four point throw on the out of bounds line.  He followed that with another big move on the edge for four points.  To finish the match he picked up a single leg and converted it to another four point throw. 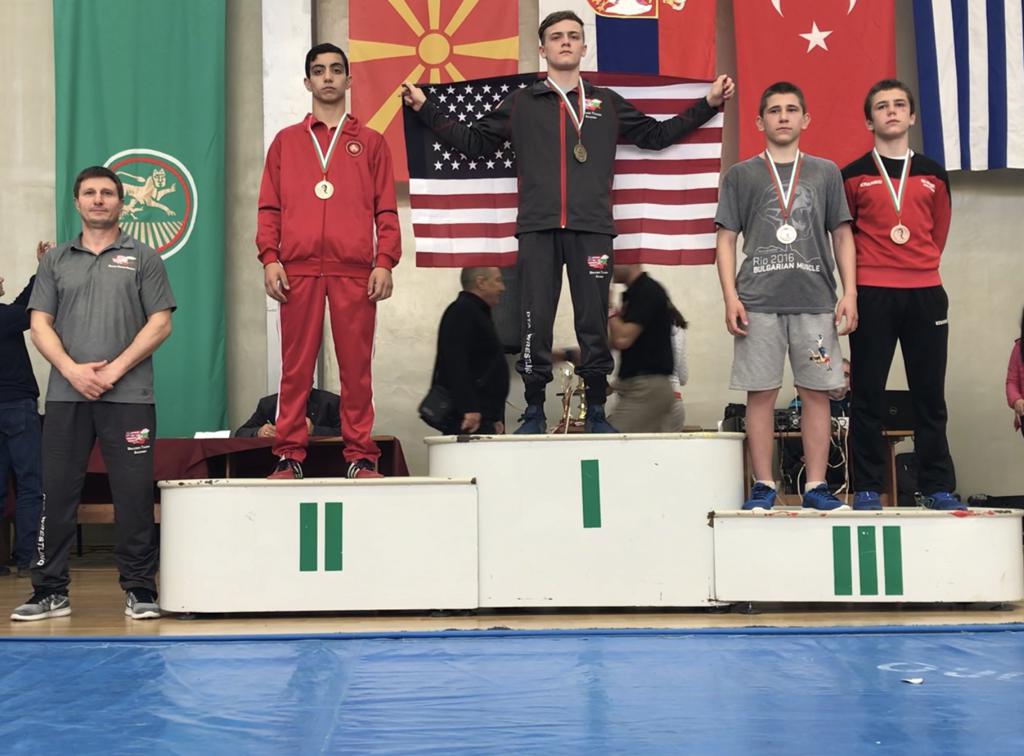 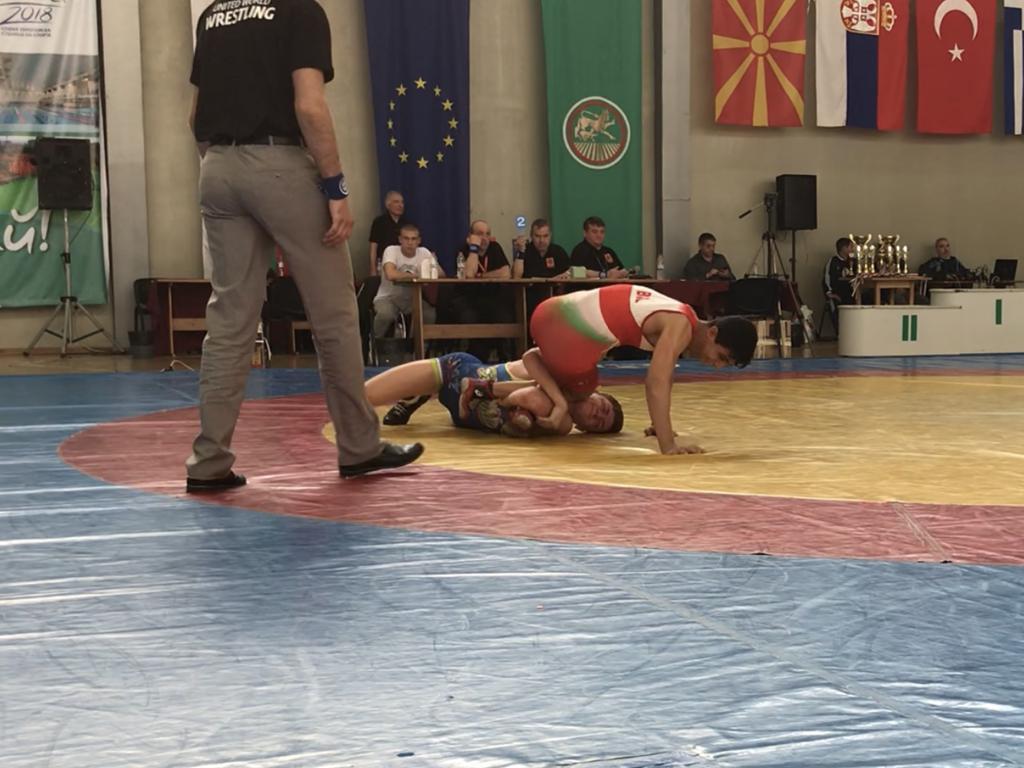 Preston Owens also opened up with a dominating victory.  He scored early on a quick double leg, then chained together two gut wrenches and two leg laces to finish off his opponent.  Next, Owens faced an opponent from Bulgaria.  Preston countered an early fireman’s attempt and followed it with a gut wrench to take a 4-0 lead into the break.  In the beginning of round two, Owens scored two points on a front headlock and two more with a gut wrench. He then finished the match with a go behind.  Against his next opponent, Owens took the early lead with a step out point.  He continued scoring from a front headlock and two leg laces to take a 7-0 lead.  With two more go behinds, he finished the match with an 11-0 victory, advancing to the championship match.  In the finals, he scored early with an arm drag then went straight to work on top with two consecutive leg laces to go up 6-0.  His opponent would score a step out on the edge of the mat.  Preston took the 6-1 lead into the second round.  There he added a gut wrench and two leg laces to finish the match 12-1 and claim his title. 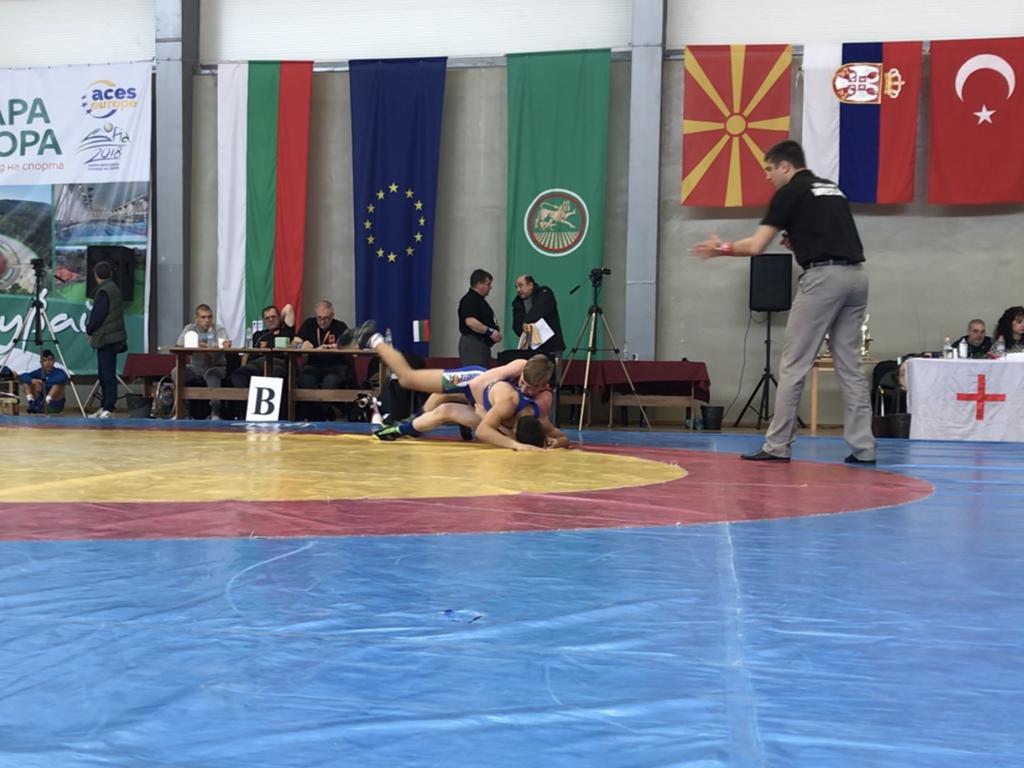 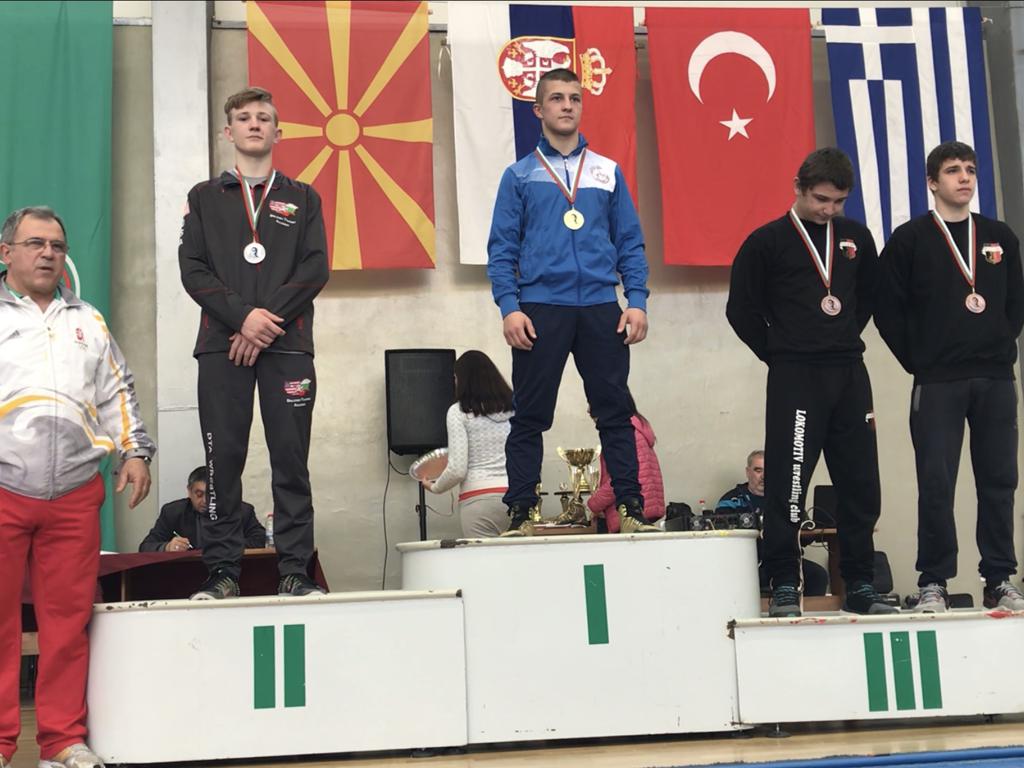 Teegan Dunn opened the Greco tournament up with a quick pin over his opponent from Serbia.  In his next match he faced early adversity giving up a four point throw.  Continuing to wrestle, Dunn came up on top for a point and earned another two with a gut wrench.  He then took the lead with a takedown and another gut wrench, finishing with a 7-4 victory.  In the championship match, Dunn found himself trialing by a 6-0 margin and wasn’t able to get past the Bulgarian opponent’s hand fighting.  Teegan finished the tournament in 2nd place. 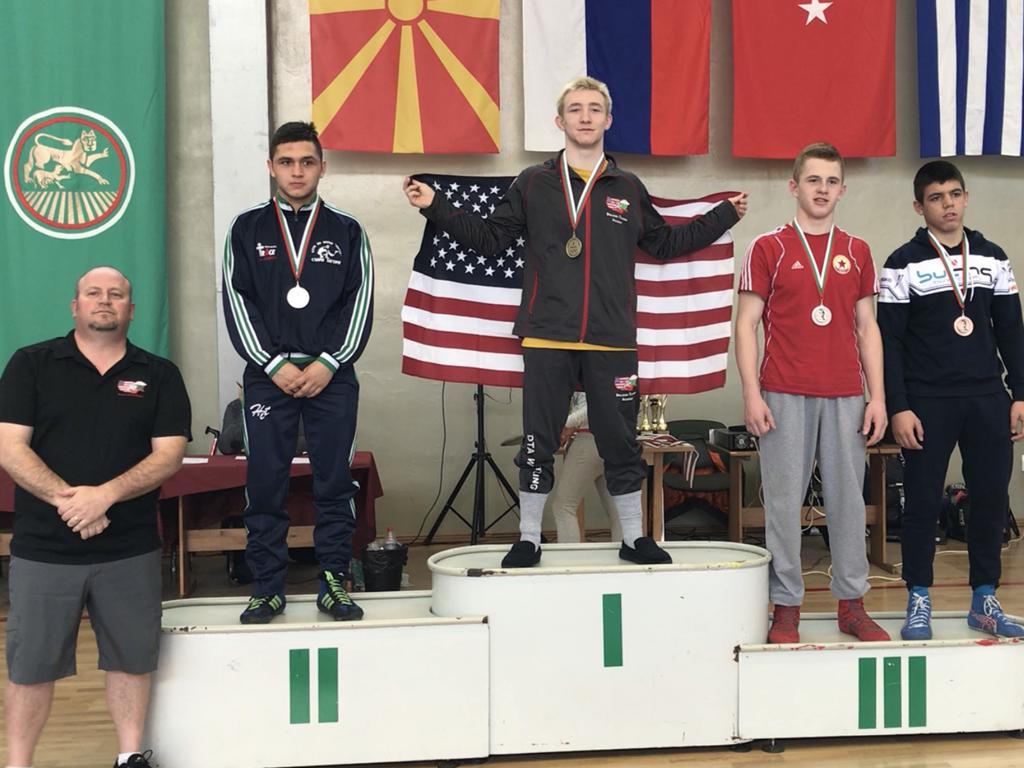 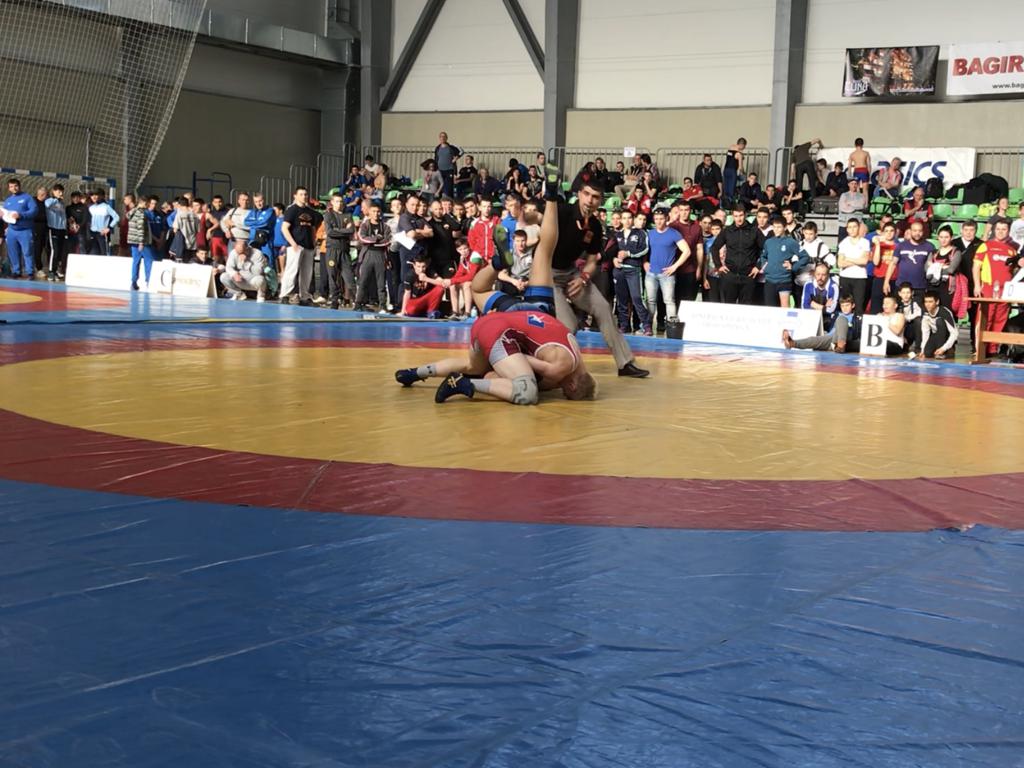 Christian Hudson got his tournament started with a go behind and a gut wrench to go up four points early. Continuing to attack, he added points on a high crotch for a takedown, and a pair off leg-laces to end the match early.  In his next match, Hudson countered a shot with a headlock, ending the match with the early fall.  In his third bout, Hudson scored on an early single leg, followed by four leg laces to earn a quick 10-0 victory.  For the championship, Hudson opened up with a go behind, collecting a trapped arm.  Then he reeled off four consecutive gut wrenches and stacked his opponent on the final one for a fall. 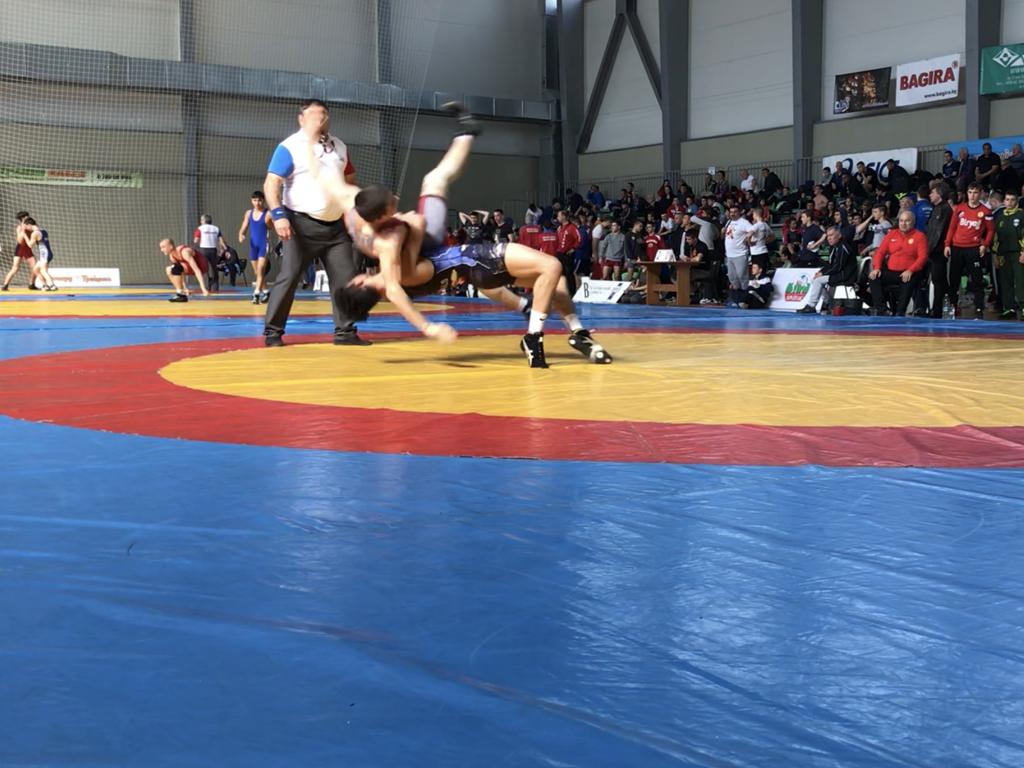 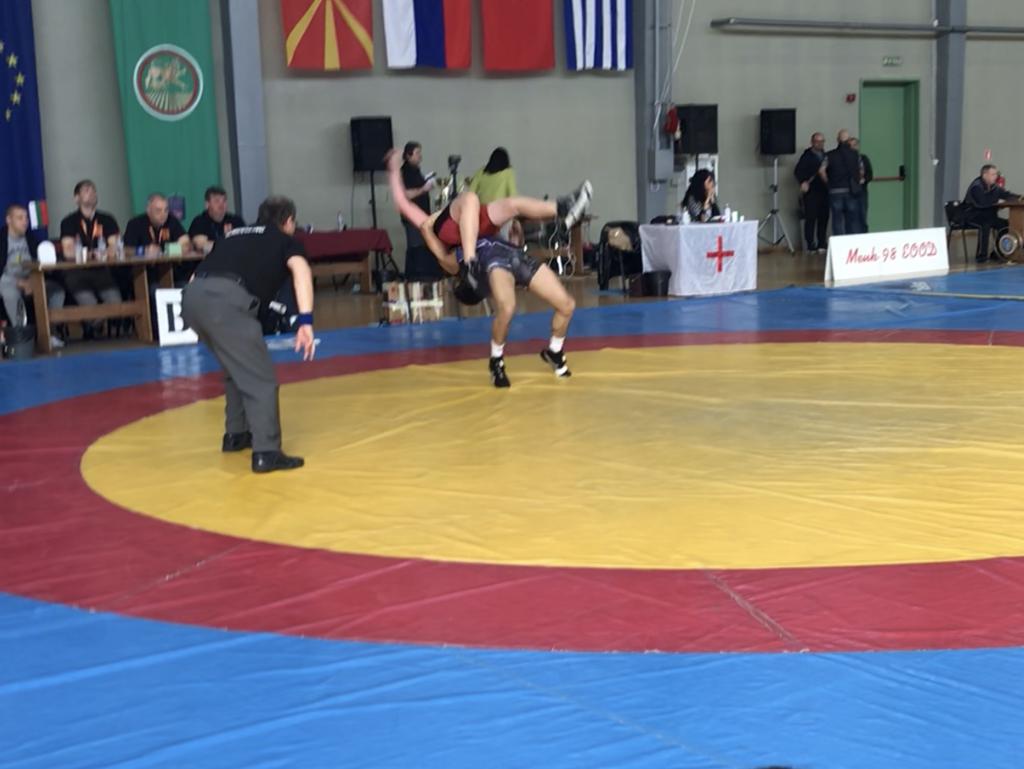 Jakob Murillo overcame an early deficit with some big lifts from par terre to defeat his first opponent.  In his next match he gave up a caution point and was put into par terre, where he gave up another two points.  He began his comeback with an arm drag for a takedown on the edge of the mat.  This would put the score at 3-2 going into the break.  Murillo took the lead with an attempted throw, turned go behind.  His opponent scored next on a two-point correct throw call.  Murillo then attempted a throw but was unsuccessful and surrendered four points, becoming a deficit that he could not overcome.  In the following match, ducked a head throw and turned it into his own five point throw, followed by another two point gut wrench.  Early in the second period he would earn another exposure to end the match with a victory. In the bronze medal bout, Murillo earned one point from a caution.  In the second round, Murillo gave up a passivity point to lose a close match.